Blog
You are here: Home1 / Blog2 / Alzheimer's and Dementia Care3 / Searching for an Alzheimer’s Cure: The Link Between Cold Water and Dem... 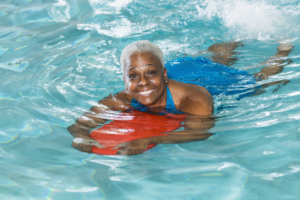 There may be a link between cold water and fighting dementia, according to experts.

In this striking new development towards an Alzheimer’s cure, a “cold-shock” protein, which is found in swimmers’ blood, is showing promising results in slowing and even reversing the progression of dementia in mice – leading researchers to further explore this link between cold water and dementia.

Related to the hibernation capacity in all mammals when exposed to cold weather, the research ties in to knowledge we already possess about how cooling body temperature can sometimes protect the brain. For example, those who experience a head injury are often cooled during surgical procedures.

And while it’s not yet fully understood, researchers know that even though some brain connections are lost during hibernation, they’re fully restored upon the mammals’ awakening in the spring. For those with Alzheimer’s disease, the lost connections lead to confusion, loss of memory, behavioral challenges and mood swings, and more – and to date, once lost, cannot be restored.

In the study, both healthy mice and those with Alzheimer’s were cooled to a level of hypothermia. Rewarming the healthy mice showed a restoration of synapses that the Alzheimer’s mice did not experience – thought to be due to the “cold-shock” protein RBM3 that was evident in only the healthy mice. As a result, researchers surmise that RBM3 may be the key to regaining functionality of brain connections.

At the time of the study, RBM3 had not yet been detected in humans, leading researchers to seek out volunteer winter swimmers, who were already becoming hypothermic on a regular basis and could help researchers determine whether the cold prompted the production of RBM3. The result: a significant portion of the volunteers were found to have high levels of RBM3 in their blood.

There are inherent dangers in exposure to the cold, however. It raises heart rate and blood pressure, slows responses, and increases breathing rate, and is too risky for researchers to recommend for seniors with dementia. The goal is to develop a drug to stimulate RBM3 production in humans and to determine its impact on dementia, in particular, to delay or prevent the disease.

“If you slowed the progress of dementia by even a couple of years on a whole population, that would have an enormous impact economically and health-wise,” explains Professor Giovanna Mallucci, head of the UK Dementia Research Institute’s Centre at the University of Cambridge.

We look forward to learning more about this link between cold water and dementia, and other promising research to help diminish the effects of dementia or possibly lead to an Alzheimer’s cure. Always here to match you with a caregiver in Fort Lauderdale, Florida or the surrounding areas, we at Responsive Home Care are premier providers of highly skilled and creative dementia care. Call us at (954) 486-6440 to learn more.